This was my second ISMIR, and I am super excited of being part of this amazing, diverse, and so inclusive community. It was fun to keep putting faces (and height, and weight) to these names I respect so much! This ISMIR has been very special for me, because I was returning to the city where I kicked off my academic career (5 years ago I was starting a research internship @ IRCAM!), and we won the best student paper award! 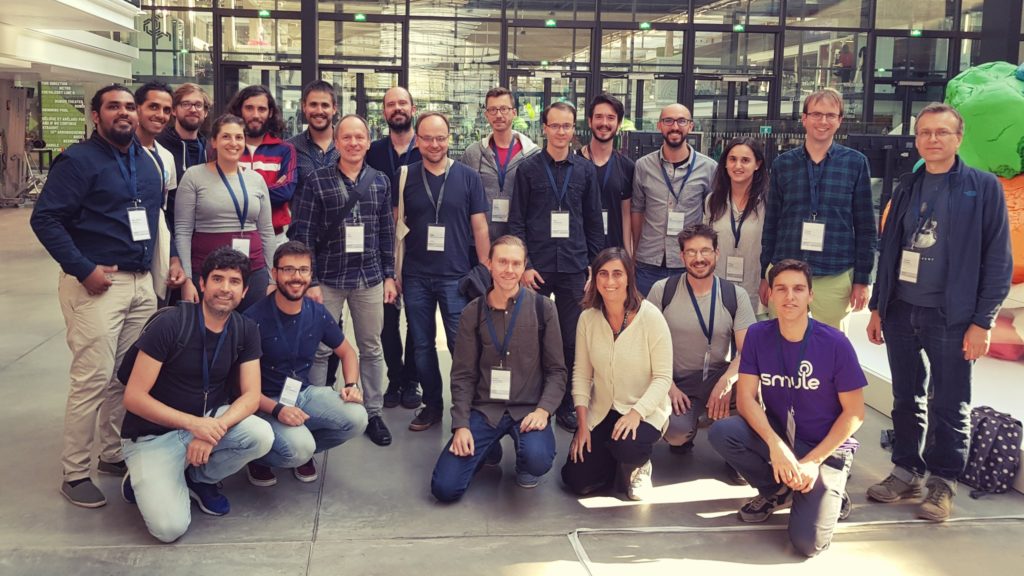 All awarded papers were amazing (of course! 🙂 ):

But there were many other inspiring papers..

Source separation has been historically considered the Holy Grail among music technologists, and now is being revisited from the deep learning perspective. According to the papers presented at ISMIR, U-net architectures seem to perform very well. For example, Park et al. presented the a paper based on U-net like structure: Music Source Separation Using Stacked Hourglass Networks. Or Stoller et al. introduced the Wave-U-Net: A Multi-Scale Neural Network for End-to-End Audio Source Separation, a model capable to do source separation directly in the waveform domain. I personally think that Wave-U-Net opens up a very interesting research direction (also explored by others) that would, in the long run, allow to get rid of the (so annoying) Wiener filtering step – that most spectrogram-based source separation algorithms rely on.

Finally, I want to highlight Lattner’s (and his collaborators) work who did a tremendous effort (3 papers!) for disseminating the results of their Predictive Model for Music based on Learned Interval Representations. In short, they propose to use a recurrent gated auto-encoder which is a recurrent neural network that operates on interval representations (that are learned in an unsupervised fashion by a gated auto-encoder) of musical sequences. Their main goal is to learn transposition-invariant features, and they show that these can work for audio & midi signals (in Learning Transposition-invariant Interval Features from Symbolic Music and Audio), and for audio-to-score alignment (in Audio-to-Score Alignment using Transposition-invariant Features).

Unfortunately, for the sake of brevity, I left out many interesting papers. Feel free to complete this list by leaving a comment below! Otherwise, here there is a link to the whole scientific program.

But.. no comments about the new format?!

Oh, yes! I could not skip writing some words related to this year’s ISMIR format: 4′ talk + poster session for everyone.

As a presenter: I really enjoyed this year’s format, and I would love to repeat it.

+ bonus track: it’s great that the talks were recorded, this makes ISMIR more accessible – what would eventually increase the impact of our works.

As an attendee: Redundancy is good! I liked the format, but we can possibly improve it.

Finally, this new format was also useful for giving more visibility to some works that were rarely selected for oral sessions – like datasets. Here a (non-comprehensive) list of the new datasets that were presented at ISMIR: